How to create a bullet chart with Datylon

Learn here how to create a bullet chart with Datylon, either the web app or plugin for Illustrator

A bullet chart is a variation of a bar chart developed by Stephen Few. Bullet charts were designed to overcome the fundamental issues of gauges and meters which typically display too little information for the space and are often cluttered with useless decoration.

The bullet chart features a single, quantitative primary measure (for example, current year-to-date revenue) and compares that to another measure or target. The primary measure is than related to defined qualitative ranges such as poor, satisfactory and good, or percentiles. The qualitative ranges are displayed as varying intensities of usually a single hue. The bullet chart’s linear no-frills design not only gives it a small footprint, but also supports more efficient reading than radial meters. Bullet charts may be horizontal or vertical, and may be stacked to allow comparisons of several measures at once.

Bullet charts have proven to be very useful for many different purposes ranging from financial reports, industrial dashboards to business performance benchmarks. You can download Illustrator files with some examples here.

In earlier versions of Datylon for Illustrator, a custom version of the Bullet chart was available, named the Datylon Benchmark chart. This is now replaced by a more generally applicable Datylon Bullet chart.

More information about the bullet chart can be found on the website of its inventor Steven Few. http://www.perceptualedge.com/articles/misc/Bullet_Graph_Design_Spec.pdf

How to create and style a Datylon Bullet chart 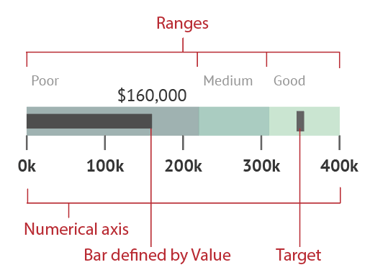 Many of the components and their styling properties are very similar to other charts, so in this article we’ll focus on the Bullet chart’s specific features.

Then Style your chart using features and properties as other charts.

To define the ranges, you have the choice to define them by the data as described above. However, in Datylon you can divide the measure data into percentiles as well. From Median (2 percentiles) to Deciles (10 percentiles), but usually not higher than Quartiles (4 percentiles) as more ranges create often too much clutter.